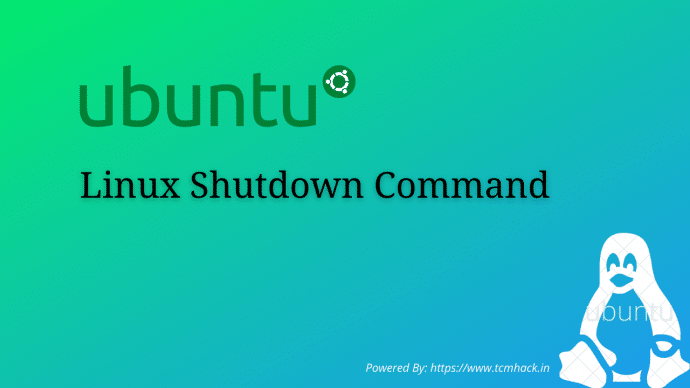 In this tutorial, we will show you how to use the shutdown command through practical examples and detailed explanations of the most common shutdown options.

The shutdown command brings the system down in a secure way. When the shutdown is initiated, all logged-in users and processes are notified that the system is going down, and no further logins are allowed. You can shut down your system immediately or at the specified time.

Before going into how to use the shutdown command, let’s start by reviewing the basic syntax.

On the recent Linux distributions shutdown is an alias to systemctl and it is available in the system only for compatibility reasons.

How to Use the shutdown Command

Only the root and users with sudo privileges can use crontab command.

When used with no arguments, the shutdown command will power off the machine.

The shutdown process starts after 1 minute, which is the default time interval.

How to Shutdown the System at a Specified Time

The following example will schedule system shutdown at 11 A.M:

The following example will schedule system shutdown in 10 minutes from now:

How to Shutdown the System Immediately

To shut down your system immediately you can use +0 or its alias now:

How to Broadcast a Custom Message

To broadcast a custom message along with the standard shutdown notification type your message after the time argument.

The following example, will shut down the system in 30 minutes from now and notify the users that a hardware upgrade will be performed:

It is important to mention that when specifying a custom wall message, you must specify a time argument too.

How to Reboot the System

To reboot the system, use the -r argument:

You can also specify a time argument and a custom message:

The command above will reboot the system after 5 minutes and broadcast Updating kernel.

How to Cancel a Scheduled Shutdown

If you have scheduled shutdown and you want to cancel it, you can use the -c argument:

When canceling a scheduled shutdown, you cannot specify a time argument, but you can still broadcast a message that will be sent to all users.

The shutdown command allows you to halt, power-off and reboot your Linux system.

To learn more about shutdown, visit the shutdown man page.

If you have any questions or feedback, feel free to leave a comment.