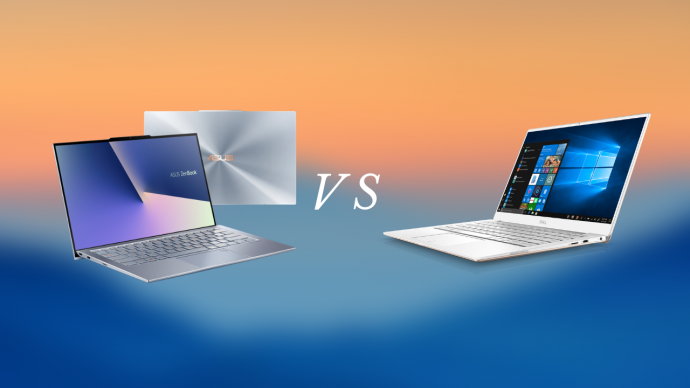 Ever wanted an XPS 13 but found its screen too small and graphics too slow? The Asus ZenBook S13 UX392FN offers a larger display and much more powerful GPU while being lighter and almost the same size as the Dell equivalent for about the same price.

The slim Asus ZenBook S series is getting better and sleeker with each generation and this latest subnotebook model from CES 2019 is no exception. The ultimate test to buyers, however, will be how well it compares to the popular XPS 13 champion. For this test, we’ll be pitting the ZenBook S13 UX392FN against the XPS 13 9380 with similar CPU and RAM configurations (Core i7-8565U, 16 GB RAM) to see which model comes out on top.

Outside of dimensions and weight, we still find the XPS 13 chassis to be more sound and slightly sturdier when it comes to rigidity and longevity. The all-aluminum UX392 doesn’t quite match the magnesium and carbon fiber makeup of the XPS 13 series.

The biggest difference between the two systems in terms of port options are Thunderbolt 3 and USB Type-A. While the Asus UX392 lacks the former and includes the latter, the opposite is true for the XPS 13. The more desirable port will depend on the user.

The MicroSD reader on the XPS 13 offers significantly faster transfer rates. Moving 1 GB of pictures from our UHS-II test card to desktop is 2x to 3x faster on the Dell system than on the Asus.

When equipped with the same Core i7-8565U CPU, the XPS 13 is able to outperform the Asus by 5 to 18 percent in CineBench R15 benchmarks. This is partly due to the superior Turbo Boost performance of the Dell as it is able to sustain faster clock rates for longer periods than the Asus as shown by our graph below.

The minor differences in CPU performance is offset by the massive GPU gains. The ZenBook UX392 is configured with a dedicated 10 W GeForce MX150 GPU whereas the XPS 13 is limited to integrated graphics only. 3DMark benchmarks show a significant performance advantage of up to almost 100 percent over the UHD Graphics 620. This makes the Asus the better system for casual games like Rocket League, Fortnite, DOTA 2, and more.

The edge goes to Asus with its larger 13.9-inch screen, more accurate colors out of the box, faster response times for less ghosting, and slightly brighter display overall. The two major advances on the side of Dell are its optional touchscreen and 4K UHD SKUs that the Asus Ultrabook is lacking.

Both laptops are essentially silent or close to it with no pulsing behavior during low processing loads like emailing, browsing, or video streaming. When gaming, fan noise on the Asus will be noticeably louder than on the XPS 13 since it carries a dedicated GPU (41 dB(A) vs. 32 to 35 dB(A)).

Naturally, the Asus will demand more power when under heavier loads by about 14 W because of its dedicated GPU. When simply word processing or video streaming, however, consumption becomes comparable to the Dell XPS 13.

Expect about 8.5 hours of battery life from the Asus to be comparable to the 4K UHD XPS 13 SKU. The FHD XPS 13 SKU, however, can last for much longer at over 13 hours when subjected to the same WLAN loads.

The biggest reasons to own a ZenBook S13 UX392FN over the XPS 13 9380 are for its larger 13.9-inch display and discrete GeForce MX150 graphics. If you ever wished that the XPS 13 could offer more graphics performance and a bigger screen without being any larger or heavier, then the UX392FN is definitely worth a look. The Asus one-ups the Dell even further by incorporating USB Type-A and a brighter and more accurate display.

On the other hand, if you have no interest in casual gaming or light video editing, then much of the appeal of the UX392FN is gone. The discrete GPU takes away from the battery life and adds more noise when under high processing loads. The XPS 13 still has the superior docking capabilities if you plan on connecting eGPUs or multiple external monitors down the road.